According to the American Cancer Society:

In order to raise funds and awareness for this often misunderstood disease, JVA client and Colorado Compassion Initiative (CCI) grantee, the Colorado Ovarian Cancer Alliance (COCA), held its first annual 5K Race for Awareness. Held at City Park, the race was a great success raising over $100,000 and engaging over 1,700 participants, making it the largest first-time 5K held at the park. 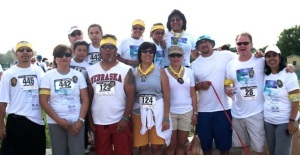 Participants at COCA's 5K Race for Awareness pose for a picture

JVA’s Guadalupe Torres took part, walking with family members and friends who had come from across the country to participate. Guadalupe had this to say about the race: “What an amazing day for women and their families to raise awareness, share in camaraderie and celebrate the strength and courage of women touched by this disease.” If you’d like to learn more about the great work that COCA is doing, click here.

JVA welcomes your comments and feedback on all Nonprofit Street articles. While JVA will post all relevant comments, it will not post comments that are advertising products or services or those with obscenities. Leave a Reply Cancel reply