Posted on October 6, 2011 by jvaconsulting

I bought my first Mac in 1984, after six weeks of taking a DOS class and after becoming convinced that the world of technology would pass me by. Within half an hour of buying the Mac, it was plugged in and I was typing away, totally enamored with the simplicity of seeing my ideas form into words on a screen in beautiful fonts. I became a fan and evangelist, in love with Apple, a love affair that never cooled. The kind of evangelist who encouraged friends, family members and clients to buy Apple, who secretly relished the scorn by the Windows crowd, and who as recently as a week ago Wednesday when waiting at my gate at Denver International Airport gushed to my husband: Look! Everyone has Macs! and iPhones!

The first grant proposal that I wrote—the proposal that really launched what would become JVA Consulting—was written on a Mac SE. As were scores of other proposals, strategic, business and fundraising plans on progressively greater Macs, including my first (tiny and heavy!) gray laptop. Eventually, as JVA moved out of my home and into the house on Highlands Square (at the same time that original iMacs were released), our office glowed with each employee’s variegated color computer. An early JVA employee handbook had this advice for new employees:

My passion for all things Apple was in part the technology, and in part the Steve Jobs vision—every person would have a personal computer. When first expressed, that vision sounded as foolish to most as many of the visions of the social innovators I get to work with every day, visions like:

Those are the visions that drive me, and why I love what I do. Successful change agents understand that nothing of significance has ever been accomplished without a grand vision and bold goals, that nothing ever changed as a result of “realistic” goals that call for only incremental improvements and tweaks.

In the last two months, critics emerged who criticized Steve Jobs for what they termed his lack of philanthropy and giving to nonprofits. Others suggested that perhaps he was an anonymous donor. And both camps really missed the point. Fundraising and nonprofits are not the end, they are a means to an end. And the end is community and social change. From the time that Apple announced the Mac through the infamous 1984 SuperBowl ad, to the Think Different Posters (a collection of which are hung in JVA’s training room) to the most recent iPhone and iPad products, Steve Jobs signaled that change was what Apple was about. His vision democratized how information could be disseminated, shared, co-created, used.

Like many great social innovators I’ve had the privilege to work with, his work was his driving force. From this speech at the 2005 Stanford commencement, are terrific guiding principles for all of us trying to make our corners of the universe a better place:

Your time is limited, so don’t waste it living someone else’s life. Don’t be trapped by dogma — which is living with the results of other people’s thinking. Don’t let the noise of others’ opinions drown out your own inner voice. And most important, have the courage to follow your heart and intuition. They somehow already know what you truly want to become. Everything else is secondary.

I can’t think of a more important message for the people I know who walk on Nonprofit Street. 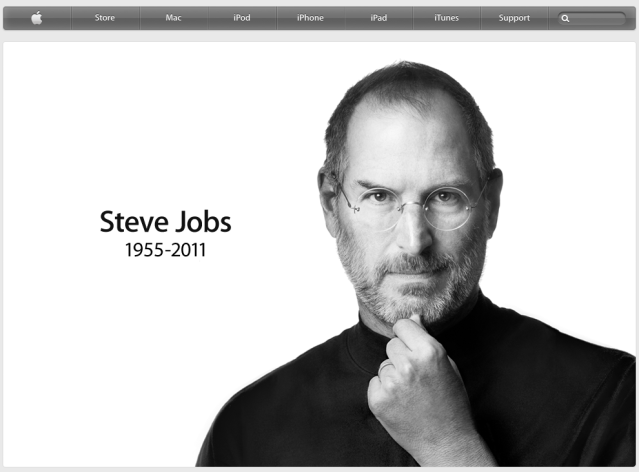 2 Responses to A tribute to Steve Jobs, extraordinary change agent

JVA welcomes your comments and feedback on all Nonprofit Street articles. While JVA will post all relevant comments, it will not post comments that are advertising products or services or those with obscenities. Leave a Reply Cancel reply